The moments that change everything. Are you really living what is most important to you? 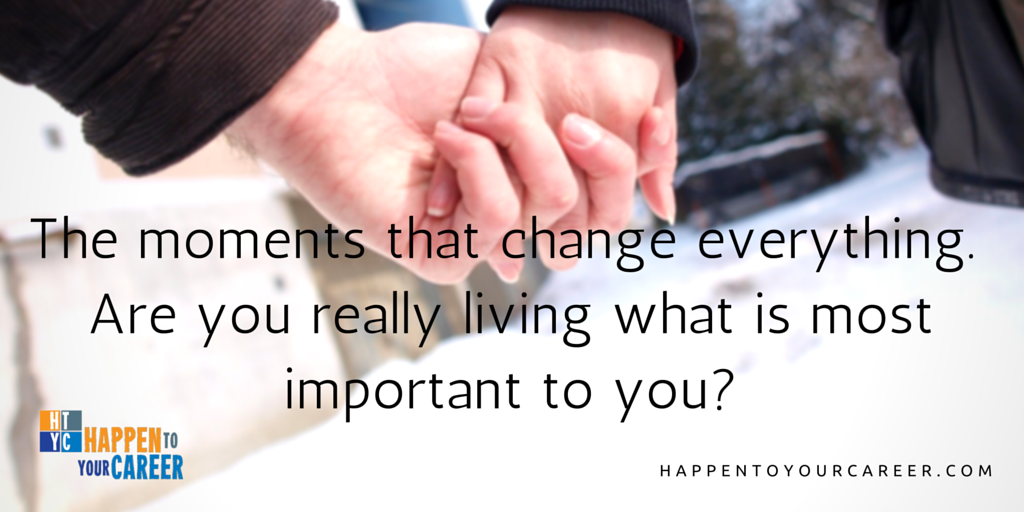 Enroll in our FREE 8-day ‘Figure it Out’ course to find the work that fits YOU!

I realize now that I heard myself say, “My family is my biggest priority.” at least a couple hundred times.

But if that were true how come I couldn’t be with them when they needed me?

Yesterday Alyssa woke up and she couldn’t see. Everything was blurry.

That’s now what I felt like as I was trying to make sense of it.

How could that be?  I own a business that helps people get clarity in their lives! This is crazy!

Here’s how it happened:

Yesterday morning I woke up just like every other day.  I did hit the snooze button once, but other than that a normal morning.  Since I get up hours earlier than Alyssa, I kissed her on the cheek and told her good morning.  She'd asked me to start doing that a while back before I left the bed.

I heard her softly say something, then turn back over and immediately go back to sleep.

I went out to the kitchen, and hit the button on the Keurig and began allowing it to make me a cup of coffee.  As I began to stir some coconut oil into my coffee, I started thinking about what I needed to accomplish that day.

I had a list from the day before, but my entrepreneurial ADD caused my mind to wander.  I set down to work and completely got lost in that tasks at hand!

A couple hours passed and I heard my name called from the bedroom faintly.

Then I heard it again and it jolted me because it was clearly Alyssa and it wasn't her normal voice and tone. That was gone. It was extremely pained and strained, high pitched and only reserved for the most severe moments in life.

It took me an additional half a second for my brain to click and realize that on this morning, that felt just like every other morning, something was not right.

I shoved my computer off my lap and sprinted from the opposite side of the house toward the bedroom. I could hear the shower running as I dodged couches and Legos.

I came into view of Alyssa crying on the floor, not moving but clearly in pain. A split second later I was next to her attempting to ask what was wrong. Eventually she told me she couldn't see. That her vision was blurry and she couldn't hear and had immense pain in her back.

After I got her into bed. I canceled my morning appointments. I had a podcast interview and a couple other things that were fun and necessary but clearly not as important as this.

We spent the morning contacting friends who were chiropractors, doctors, or worked around the medical industry. We really weren’t sure what was wrong.

By 9am we were at physical therapy and Alyssa was getting seen.

I brought my laptop with and did a bit of work and congratulated myself on reacting so well that morning! (I put her in front of everything else right?)

She came out.  They had determined that the combination of teaching more fitness classes than usual, starting to do some longer runs again, and taking up beginners yoga (all while ignoring some major pain for about 3 weeks) had led to her having some severely inflamed muscles that compressed her nerves. It would heal with time and the right attention and stretching.

Everything was going to be ok!

Except that it wasn’t.

Because even though I had just got done congratulating myself on how well I had supported my wife, it took me less than 48 hours to realize that I really wasn’t putting her first.

She couldn’t do dishes or laundry or pick up one of the billion Pokemon cards that our kids had absent-mindedly left as they got distracted with something else instead.

The problem? Well I didn’t feel like I could do them either.

It was much worse than that.

See, I had been building Happen to Your Career on the side of my job in HR leadership for a couple years now and I was working nearly full time for both.

You might say, “Well, just take some time out from both of those and take care of your wife and family already!”

…and you would be right!

That’s where the problem comes in, I didn’t feel like I could.

My boss was already bending over backwards to allow me the flexibility to build this business and I had somehow unintentionally molded the business to where it needed me to be available for it!

I teach people all the time to build a life and work that fits them, that allows them to do what they want to and put the most important things first!

I had forgotten my original intention in the first place – to put my family first and be there for them by helping others take control of their lives and work!

In the process I had lost control to the point where I couldn’t do the dishes and the laundry for Alyssa for a couple weeks when she needed me the most!

For a full 24 hours I felt like such a jerk, and a fraud and a failure all in one!

This had to change.  This was not how life should be… and it definitely wasn’t what I was teaching other people to do.

I decided I needed to make some major changes in my business and my life… a course correction if you will.

It started immediately after a conversation with my friend Jody Maberry, who two years ago was a listener on our show who reached out, eventually we became friends, he became a coaching client, I became a client of his… now much later are good friends and have a standing accountability call every Friday morning at 8 am.

He told me the story of Lee Cockerell, who’s been on our show and I had the pleasure of meeting him and his wife Priscilla, in person this summer!

When Lee was at Disney, he used to tell his assistant that if his wife ever called, to get him out of whatever he was doing. It didn’t matter what it was. She knew he was busy and if she was going to take the time to call him that meant it was important. He was also very up front at the office, that his wife and family was the most important thing. Period. Then it wasn’t a surprise when this happened.

To some that might sound crazy. To me it sounded like truly making the things you say are most important, actually most important.

Since then I have adopted this principle into my life:

My family is the most important thing… and I'm going to act like it.

This has led me to change the way we are growing our business. It’s important to me that we have a very personal touch with our readers, listeners, students, clients and you! (If we didn’t have that I never would have made a friend like Jody) It’s also important to me that if I need to, I can step away from my work to be with my family.

Maybe that means that we will automate a few more things in our business.  Maybe that means I will bring more people on to help with our projects.  It definitely means that I will be intentionally building and growing HTYC so it doesn’t take over my life but instead adds to it and complements it!

I have realized that many of the things we tell ourselves “we have to do” cause us to change our priorities!

What are the things in your life right now that you say are a priority but when you look closer you really aren’t acting like it?

Or what are the areas of your life you want to make a higher priority and most important?

Is it your family?

Your mom or your dad?

Your pursuit of something you love to do?

Your need to make more money to get out of debt?

What is it for you?

I want to know! Leave me a comment below!