061 How to Approach Your Career Scientifically with Adarsh Pandit 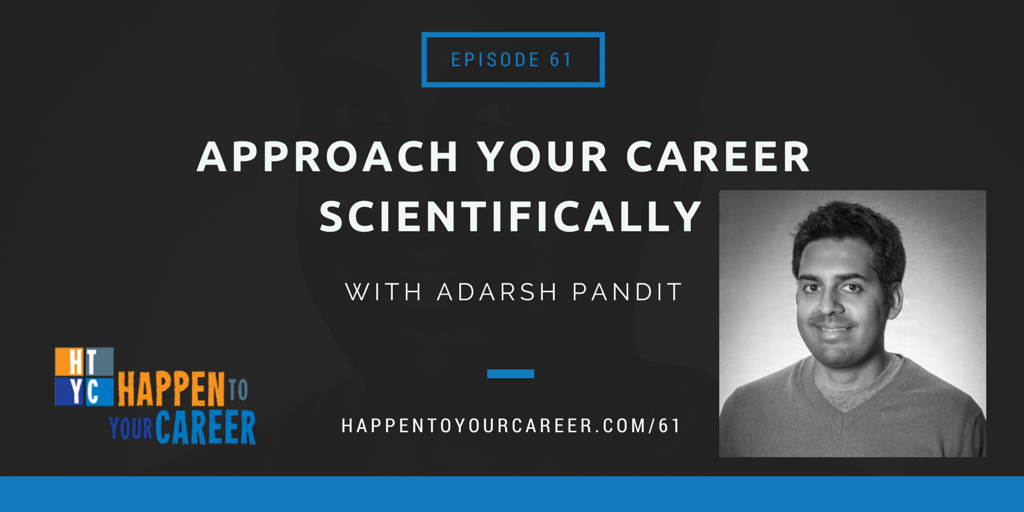 Scientist-turned-management-consultant-turned-developer, Adarsh Pandit is definitely no stranger to career changes! Right now he’s the Managing Director at Thoughtbot, a company that focuses on designing and building digital products, primarily SaaS tools for other developers and designers.  He specializes in Ruby on Rails, hosts the Reboot Show podcast, the show that spotlights people who’ve made BIG career transitions.  OH! And he’s got a PhD in Biochemistry too!

Growing up in the Detroit area and surrounded by a family of GM “lifers”, Adarsh learned the basics of car repair, but decided to be the family rebel and pursue science.  He got his PhD in Biochemistry, but soon found that the path to becoming a professor wasn’t what he wanted at all. He recognized that being successful in academia required “targeting the RIGHT problems” and some element of “luck” and he felt he lacked the passion necessary to be “amazing” in the career path he was on.

Sign up for our FREE 8-day Work You Love:  One Stop course!

After making the decision to leave academia, feeling lost and unsure about his next move, Adarsh adopted a scientific approach to his career search! He started reaching out and talking with people in a wide variety of careers, venture capitalists to business owners.  He also began interviewing for jobs like crazy, taking interviews for positions that didn’t seem like a good fit on the surface.  Consequently, Adarsh was able to not only hone his interviewing skills and perfect his “story”, he was able to get over the fear of interviewing.

Adarsh considers networking just another way of “making friends”.  He says he’s gotten just about every position he’s ever had through his relationships.

Attracted by the research and analysis component, Adarsh found landed a job as a consultant at McKinsey and Co. He loved the work, but over time the long hours and extensive travel pushed him out the door.

After some time as an independent consultant, then ultimately getting fired from a job where he admits he was “phoning it in”, Adarsh decided to take the leap and focus himself 100% on his growing passion for computer programming. He put himself out there and joined Ruby on Rails meetups, met other developers, built a network of support, and eventually got into Thoughtbot’s Apprentice.io program.   This was the move that led him to his current position. He’d found his tribe!

Everything clicked. He realized that what really drove him was moving an idea from its inception through to a finished product. Making a direct impact on the customer was extremely gratifying.

It’s all about gratitude.  Appreciation for where you are, love for the process, and being thankful for those who’ve supported and opened doors for you.

It’s easy to look at someone who’s in a place NOW where they’re happy and fulfilled in their work and admire their accomplishments, but not see the entire journey that led them there.  Adarsh says,

“The truth is it was super scary and really nerve wracking and difficult…and that’s to be expected, but the whole time it was like ‘where do I belong?’, ‘where do I fit in?’

I’m the little girl in the Blind Melon video looking for the other bee people. How do I get to where I want to go?” 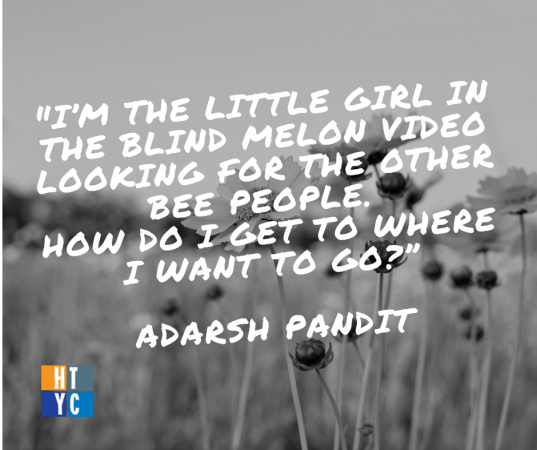 Reboot Show – featuring interviews with people who have made big career transitions; hosted by Adarsh Pandit

Our FREE 8-day Work You Love:  One Stop Course – our free email course packed with exercises and tools to help you discover the work that moves you!

Episode 044 No, really!  Relationships are What Takes You Places!

Episode 043 How Do You Know When It’s Time to Move On?

Get in Touch with Adarsh!